By now, the prediction that most jobs performed by humans today will be taken over by robots and artificial intelligence has ceased to be a surprise. It’s a fact that most of us are coming to terms with. After all, we’ve been seeing the replacement of human jobs with machines for decades now.

Most jobs requiring hard, physical labor are now being performed by automated machines. A majority of low-level manufacturing jobs have already been mechanized. Recently, newer AI applications have been developed that are helping humans with even the white-collar work, which once, not long ago, seemed out of the realm of AI capabilities. This brings us to the realization that maybe, there’s nothing that we do that AI can’t. Does that mean that eventually most of us will become obsolete in the workforce? Will your students, regardless of their skills and career preparation, remain irrelevant? Will the human existence in the future be characterized by mass unemployment and aimlessness?

Well actually, no. How?

Humans are being displaced, not replaced in the workforce

Although it’s true that most jobs that we humans do today will be performed by AI tomorrow, we will still make up a major part of the workforce. What will have changed, however, is the nature of work that we’ll be required to perform. And it’s nothing new. It’s been happening all along. For instance, postal services have been rapidly losing relevance since the advent of the internet, so much so that the job title “Mailman”, won’t exist in a few years.

But that doesn’t mean that the internet completely replaced the need for humans. In reality, it created the need for humans in new roles. For instance, the job titles “Network engineer”, or “Web developer” never existed before the internet came about. But now, many new job roles exist solely because of the existence of the internet. Similarly, lift operators are all but extinct today, since all modern elevators function autonomously. But, that doesn’t mean autonomous elevators have killed jobs. The demand for elevator designers, engineers, and technicians is continuously increasing even now, as you read these words.

The increasing application of AI across industries will bring about a similar change in the future. Although there are numerous jobs today that won’t require humans eventually, there will be many new jobs that would require human workers. The demand for AI researchers and data scientists—who are required to create, manage, and use AI systems—is seeing a steep rise in the existing job market and will continue to do so in the foreseeable future. The new AI applications that are emerging will spawn new functions or even new industries that will require human workers. Jobs requiring a mix of creative and technical skills will, for at least the foreseeable future, won’t be threatened by AI.

Hiring standards are evolving, and educators need to step in 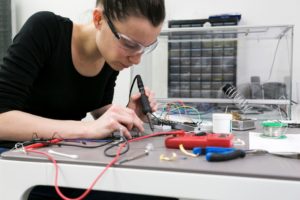 One thing that will never change is the increasing hiring standards for jobs. The job market is evolving to replace all low-level jobs and those requiring general aptitudes with high-level jobs that require specialist knowledge and skills. But the issue with having specialist skills, especially in the technology domain, is that their validity is not always certain. Technical skills that are at peak demand today may not even exist someday not far in the future.

This means that choosing the right set of skills to gain expertise in—which is a vital aspect of career preparation for college students—is becoming harder. Hiring standards are changing rapidly, which means choosing the right set of skills for achieving career success is becoming increasingly unpredictable and difficult. Not knowing where their skills and interests might add value can hamper students’ career preparation efforts.

To eliminate uncertainty while making career choices, students require both guidance from their educators and mentors as well as valid information about the job market. Although educators have always been more than willing to extend any kind of support that the students may require, they haven’t always had the capability to, as it were, peek into the future and know what career choices would be fruitful for their students.

But now career guidance teams of universities and colleges have the unprecedented opportunity to provide students with both the guidance and the requisite information to make optimal career choices. They can draw from their own extensive experience to guide students on how to choose the right career, while using labor market analytics to gain real-time insights about the job market. They can use career preparation and planning tools like Talismatic’s new student app to not only explore different career options available for different skill-sets but also directly apply for jobs that are tailor-made to every student’s needs, interests, and skills.